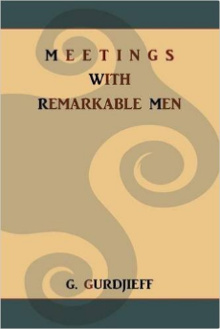 “I must tell you that in our brotherhood there are two very old brethren: one is called brother Ahl and the other brother Sez. These brethren have voluntarily undertaken the obligation of periodically visiting all the monasteries of our order and explaining all various aspects of the essence of divinity.”

“Our brotherhood has four monasteries, one of them ours, the second in the valley of Pamir, the third in Tibet, and the fourth in India. And so these brethren Ahl and Sez, constantly travel from one monastery to another and preach there.”

“They come to see us once or twice a year. Their arrival at our monastery is considered among us a very great event. On the days when either of them is here, the soul of every one of us experiences pure heavenly pleasure and tenderness.”

“The sermons of these two brethren, who are to an almost equal degree holy men and who speak the same truths, have nevertheless a different effect on all our brethren and on me in particular. When bother Sez speaks, it is indeed like the song of the birds of paradise; from what he says one is quite, so to say, turned inside out; one becomes as though entranced.”

“His speech 'purls' like a stream and one no longer wishes anything else in life but to listen to the voice of brother Sez.”

“But bother Ahl's speech has almost the opposite effect. He speaks badly and indistinctly, evidently because of his age. No one knows how old he is. Brother Sez is also very old — it is said three hundred years old — but he is still a hale old man, whereas in Brother Ahl the weakness of old age is clearly evident. The stronger the impression made at the moment by the words of brother Sez, the more this impression evaporates, until there ultimately remains in the hearer nothing at all.”

“But in the case of brother Ahl, although at first what he says makes almost no impression, later, the gist of it takes on a definite form, more and more each day, and is instilled as a whole into the heart and remains there forever. When we became aware of this and began trying to discover why it was so, we came to the unamimous conclusion that the sermons of brother Sez proceeded only from his mind, and therefore acted only on our minds, whereas those of brother Ahl proceeded from his being and acted on our being.”

This book 'Meeting with Remarkable Men' is, in a way, Gurdjieff's auto-biography — or so we are led to believe. How much of it is a work of fiction, we shall never know — but it makes a good adventure novel, and is very readable. No doubt some of it is based on Gurdjieff's own travels and youth, and own personal quest. As an accessible and readable book it is also a good introduction to the Gurdjieff genre. (The alternative introduction would be Ouspensky's 'In Search of the Miraculous'.) There are, of course, other Gurdjieff books: e.g. Beelzebub's Tales to his Grandson (Gurdjieff's own work — dictated by him towards the end of his life), or the excellent series by Maurice Nicholl's (an English doctor and Jungian therapist, who studied with Gurdjieff) called 'Psychological Commentaries on the Teachings of Gurdjieff and Ouspensky'. This series is currently out of print, but (inexpensive) Kindle editions are available.