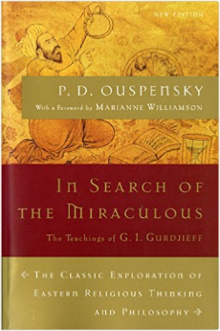 “In Search of the Miraculous”

“G summoned about fifteen of his people and arranged a lunch which, at that time, was luxurious, with zakuski, pies, shashlik, Khaghetia wine, and so on, in a word it was one of those Caucasian lunches that begin at midday and lat until the evening. — He seated A near him, and was very kind to him. My heart suddenly fell when I realised to what a test I had brought my old friend. The fact was that everyone kept silence.”

“A held out for five minutes. Then he began to talk. He spoke of the war, of our allies and enemies together and separately; he communicated the opinions of all the public men of Moscow and St. Petersburg upon all possible subjects; then he talked about the desiccation of vegetables for the army (with which he was then occupied in addition to his journalistic work) particularly the desiccation of onions, than about artificial manures, agricultural chemistry, and chemistry in general; about 'melioration'; about spiritualism, the 'materialisation of hands', and about what else I do not remember now.”

“Neither G nor anyone else spoke a single word. I was on the point of speaking, fearing that A would be offended, but G looked at me so fiercely that I stopped short. Besides, my fears were in vain. Poor A noticed nothing, he was so carried away by his own talk and his own eloquence that he sat on happily at the table and talked without stopping for a moment until four o'clock. Then with great feeling he shook hands with G and thanked him for his 'very interesting conversation'.”

“G looking at me, laughed slyly.”

“I felt ashamed. They had made a fool out of poor A. He certainly could not have expected anything of the kind, so he was caught. I realised that G had given a demonstration to his people.”

“'There, you see,' he said, when A had gone. 'He is called a clever man. But he would not have noticed it even if I had taken his trousers off him. Only let him talk.”

“He wants nothing else. And everybody is like that. This one was much better than many others. He told no lies. And he really knew what he was talked about, in his own way of course. But think, what use is he? He is no longer young. ”

“And perhaps this was the one time in his life when there was an opportunity of hearing the truth. And he talked himself all the time.”

A good book to start with if you are interested in the Gurdjieff work. This is, after all, the first book written about this genre, around one hundred years ago, by Ouspensky, during the Great war (1914-1918) and just after, a time of great political upheaval and social change (e.g. the collapse of the Tsarist regime in Imperial Russia). This was when Gurdjieff (Mr G as the book refers to him) appeared on the scene, and both Mr. G and Ouspensky (who was a journalist and had lived in London) were relatively young men, in their prime, and Gurdjieff's teaching had great vitality and clarity — before he had any following, or became known (or 'discovered' as we would now say). G was the first of the oriental teachers (he was from Southern Russia, near the Caucasus) in that he had studied in 'the East' — to appear in the modern age, in the twentieth century, in Western Europe, and appeal to educated, literate, urbanised contemporary people. This was a time when there was great interest in the occult and spiritualism, and the religions of the East (e.g. Theosophy, Buddhism) and vastly increased general education and literacy. European civilization and empire (Britain, France, Russia) had expanded into Asia (India, Indo-China, and central Asia) yet little was really understood about the psychology of Eastern thought (e.g. Buddhism) and Christianity was still sending missionaries to 'convert the heathen' as European empires had expanded — delivering a Eurocentric world view and conceptual framework. So G was a pioneer in that he was the first person to reverse this flow, and became perhaps the first Asian spiritual teacher to teach in the West. Many more were to follow, as the twentieth century progressed — but he was one of the first. (There were admittedly others: e.g. Paramahansa Yogananda, Autobiography of a Yogi, who first visited the USA in 1920)

Of course, the modern term 'mindfulness' had not been invented back then. But read the selected excerpts above, and you will understand how we could now apply this term to the Gurdjieff work. It seems remarkably similar to what G called 'self-remembering'.